5 Incredible Volcanoes To Visit In Greece As with most things in Greece, a lot of its phenomena are named after a Greek God or occurrences in Greek Mythology. Volcanoes are a perfect example of this. Hephaestus, the son of Zeus and Hera, was the Greek God of volcanoes and is thought to have been a craftsman and blacksmith with his forge lying underneath a volcano.

In reality, geology shows us that the large volcanic arch in Greece, formed millions of years ago as the African lithosphere sunk under the European/Asian tectonic plate, created a lot of past volcanic activity in the region due to many earthquakes. This has resulted in a lot of volcanic landscape that can be seen across many different regions on the mainland and the country’s islands.

Possibly not as famous as the Italian volcanoes of Etna and Vesuvius yet no less interesting, most of Greece’s volcanoes are extinct but some are still active, thankfully lying dormant for a long time! Hiking tours around these have become a popular activity with some volcanoes very well known, others not so much. Let’s take a look at five of the most incredible volcanoes to visit in Greece.

Another island in the Cycladic chain that has a small airport with flights from Athens, or reached by ferry, Milos’ volcano lies dormant in the center of the island, but don’t worry, it hasn’t erupted since 90,000 BC. This past activity means the island is rich in minerals and has given it an otherworldly landscape with over 70 beaches to choose to relax from.

The beach of Sarakiniko is the most famous with its stark white lunar landscape contrasting against the blue sea and sky, almost hurting your eyes. The white rocks have eroded over time, creating “craters.” There’s no sand here, so people tend to spread their towels out over the rocks. I prefer to visit at a later time of the day just to photograph it and avoid the crowds that tend to gather to swim from it.

It’s not only beaches that Milos is popular for. The mineral presence on the island means that a lot of its population doesn’t just work in tourism, they also work in the mining industry. On Milos, you’ll find one of Europe’s largest mines: The Aggeria Mine extracts Bentonite clay — the product used as a detoxification aid. Greece is the third largest producer of Bentonite in the world, after the U.S. and China. It’s worth a visit to the Milos Mining Museum in the small town of Adamas to understand more about the unique heritage of the island. Probably one of the most famous volcanoes, not only in Greece but worldwide, is the one found on the popular Cycladic island of Santorini. The island has wild beauty, formed over a period of several eruptions under the sea an incredible 400,000 years ago.

The result was a collapse of the mouth of the volcano, forming the caldera which visitors to the island will see today.

The last eruption was in the 1950s, with hot springs bubbling up from the sea. The legacy of this period of volcanic activity means that beaches on the island aren’t white and sandy, which Greece is renowned for. The beaches are more of a multi-colored black or red variety, and the volcanic soil seeps into anything growing on the island, giving a unique sharp and strong flavor to the produce.

It’s possible to take a boat trip out to the volcano from the harbor at Santorini and hike around the edge of its crater. Wear sturdy walking shoes or sandals — and go as early as possible. The iron, lava, and sulfur fumes mean that, while it’s interesting, it can get really hot to leave the volcano too late on a summer day. 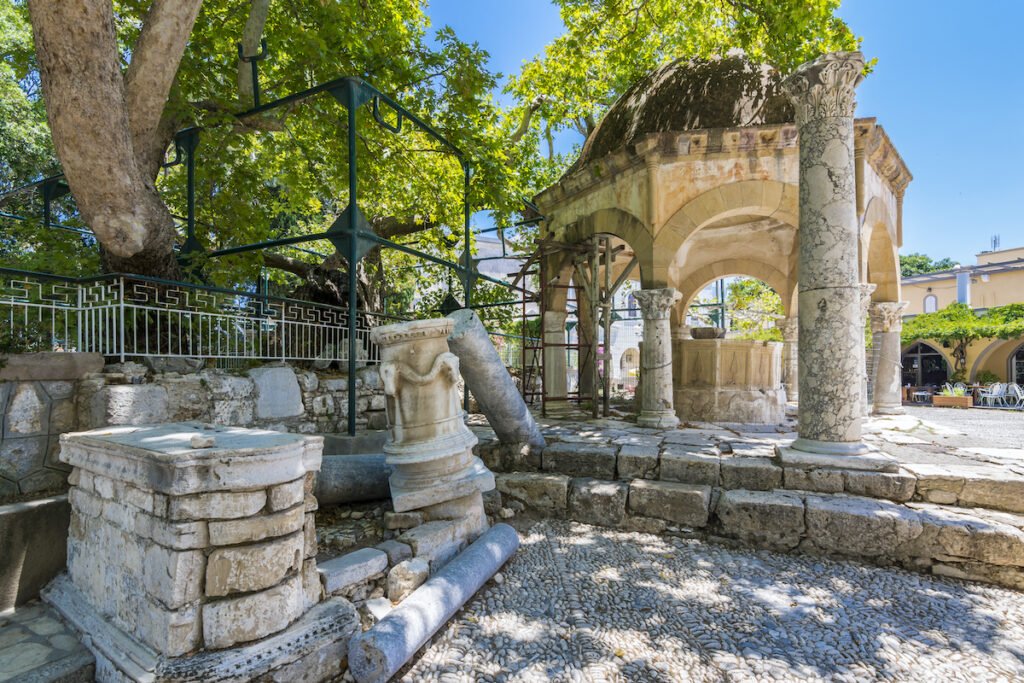 The third-largest Greek island of Kos is a very popular tourist destination accessible from many European destinations and connections from Athens, not to mention by ferry from Piraeus.

Kos is famous for being the home of the Greek physician and founder of modern medicine — Hippocrates. Here, you can sit under the plane tree where it’s thought he taught his pupils in Kos Town, the capital. Kos has had a small amount of volcanic action in the past, meaning there’s a less dramatic landscape, but come and experience it in other ways.

The Beach of Therma, nicknamed Bubble Beach and 7 miles from Kos Town, has hot springs under the sand with a water temperature of 113 degrees Fahrenheit that mix with the sea water, heating it up and making hot pools of mineral water and, effectively, a natural jacuzzi.

These thermal springs mean it’s a popular spot to relax, even during the colder winter months. 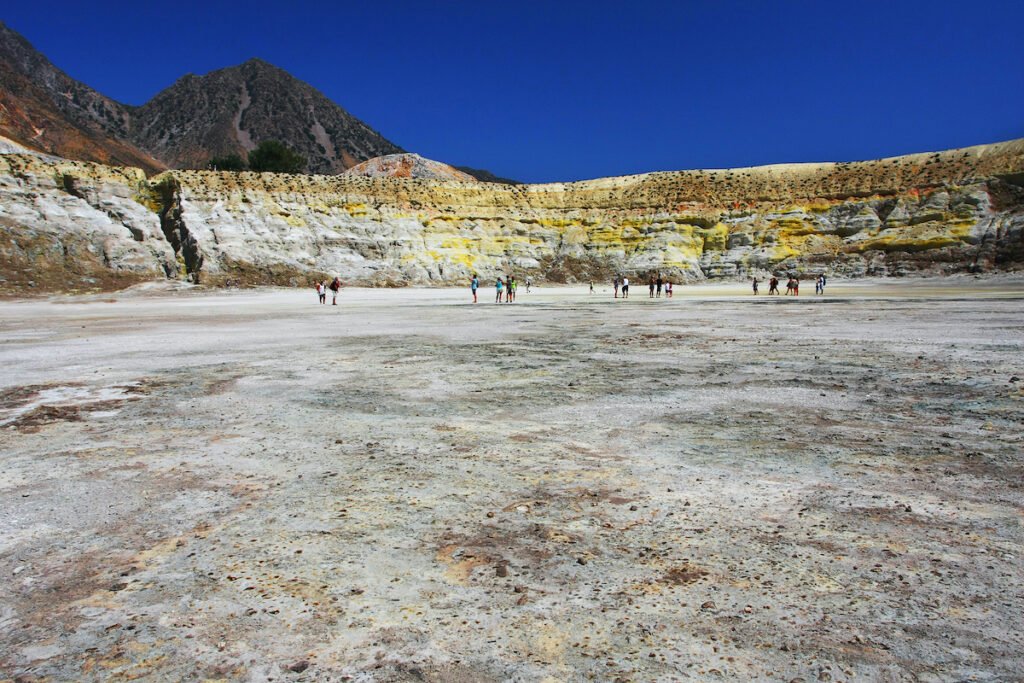 Nisyros is a remote island in the Dodecanese chain of Greek islands, accessible by ferry from Athens or a flight to Kos and ferry connection. Despite its size, the volcano here is the second most famous in Greece. It’s also the youngest of the volcanoes in Greece at 160,000 years old.

The caldera, the 6- to 7-meter crater in the center of the island, was formed during an eruption in 1872 followed by another eruption in 1888, creating several more craters. Still occasionally spewing sulfuric fumes, Nisyros’s crater is thought to be the largest and most preserved hydrothermal crater in the world.

The 15,000-year-old rock formations can be found scattered across the whole island, with the volcanic and fertile soil making Nisyros a unique island to visit on your Greek itinerary.

There are many coach trips to the volcano from the main town of Nisyros, but go early in the morning and out of season when it’s not so hot or busy. And bring good walking shoes and a hat!

Be warned: The fumes can be off putting, so be aware of this if you have a sensitive stomach. 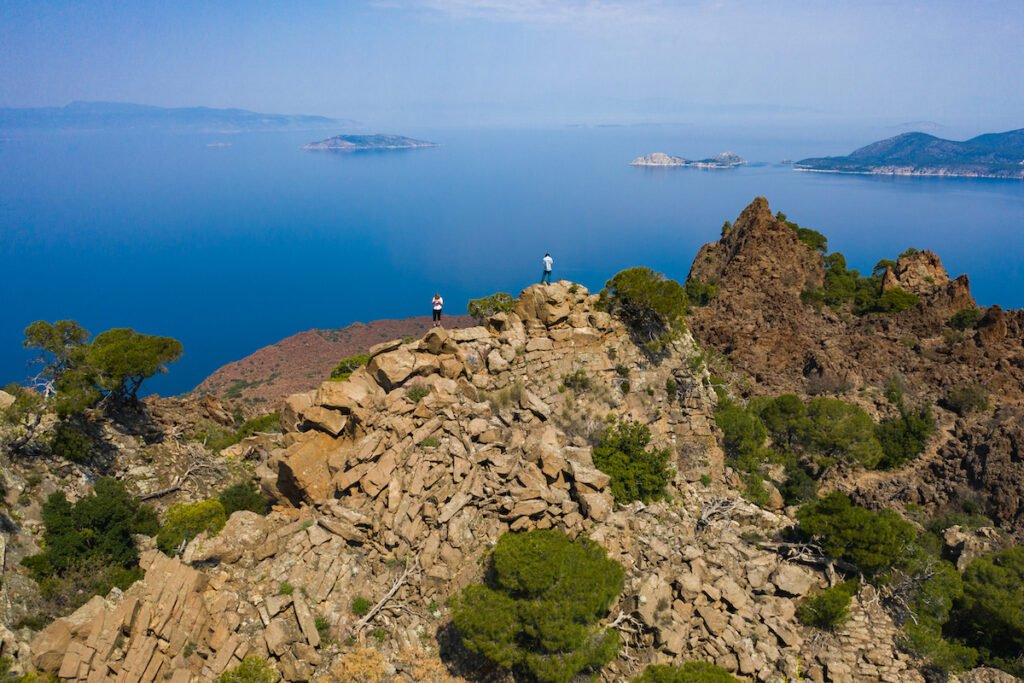 Moving to the mainland now, Methana is a peninsula found in the northeast part of Greece’s Peloponnese region. It’s reached in 2 hours and 55 minutes by bus or car from Athens. Alternatively, if you enjoy the journey rather than just the destination, travel by ferry from Piraeus via the Saronic islands, which is actually slightly quicker at just under 2 hours 50 minutes.

The whole peninsula has about 32 small-domed volcanoes scattered around, volcanic activity thought to have started about 1 million years ago and a large eruption happening in 230 BC.

The last eruption was in 1700 and the volcanic activity around Methana has resulted in a beautiful landscape where flora and fauna flourish. If you’re a fan of the outdoors and like hiking, be sure to put Methana on your Greek itinerary.

The volcanic activity over the years has created several hot springs in the region and, in the past, a gorgeous neoclassical building housed a huge thermal spa in the town of Methana itself. Unfortunately, since 2017, and mainly due to competition from other more updated spa experiences in Greece, the Methana Spa has been closed, but its building and architecture can still be seen and admired.

In the fishing village of Vathi, the capital of the peninsula during times of Antiquity, you’ll find the acropolis of “Ancient Methana,” known as Paleokastro with walls and an ancient temple. Much of the original structure fell into the sea after volcanic activity, so what remains are ruins to explore.

Pro Tip: Don’t leave Methana without relaxing on one of the area’s several volcanic beaches that can be found in Vathi and Limnionas.

The volcanoes in Greece are well worth exploring in order to understand their history. You don’t need to be a fan of geology to appreciate the uniqueness they lend to the landscape and the country as a whole.